Aquinas Catholic Middle & High School held its annual Veterans Day Program on November 11, 2021. Local veterans presented the flag and the Aquinas band performed the National Anthem. Students and faculty learned from Ann Sabata, the President of the US VFW Auxiliary, that today was originally called Armistice Day. The history of Veterans Day began on November 11, 1919 as Armistice Day, to commemorate the first anniversary of the end of World War I. After World War II, Armistice Day was extended to celebrate veterans of both wars. In 1954, congress approved of the name change to Veterans Day.

A large portion of the program was dedicated to learning about the most highly decorated military chaplain, Fr. Emil Kapaun. After four years of serving his home parish in Pilsen, Kansas, Fr. Kapaun entered the US Army Chaplain Corps in 1944. He served in World War II and the Korean War. He was well known for his bravery and determination in administering the Mass to the front lines. Fr. Kapaun and fellow soldiers were captured in November of 1950 and taken to a POW Camp 40 miles away. During this ‘death march’ in winter, Fr. Kapaun encouraged many soldiers not to give up and encouraged others to help those that couldn’t walk anymore. In the POW Camp, he administered to his men spiritually and physically, even stealing food to help keep others alive. Fr. Kapaun died as a prisoner of war in Northern Korea in 1951. Fr. Kapaun was given the title ‘Servant of God’ by Pope John Paul II, the first step towards sainthood, and the Catholic Church is currently considering him for sainthood.

Jennifer Frasher, mother of current Aquinas students Gianna and Miriam, presented her unique connection to Fr. Emil Kapaun. Jennifer’s mother, JoAnn (Svoboda) Nowak, grew up in the same small town as Emil Kapaun and even had him as their parish priest growing up. Her family and parish were given the sad news when Fr. Kapaun died, but never knew where he was buried. For 70 years his remains were unidentified until March of 2021. Fr. Kapaun’s remains were brought back home to Kansas and laid to rest inside the Cathedral of the Immaculate Conception in Wichita, Kansas on September 29, 2021. JoAnn Nowack was able to watch online through tears as her childhood priest and now “Servant of God” was brought back home.

The program concluded with the 21 gun salute and trumpet solo, “Taps” performed by Aquinas junior Mara Yindrick, under the direction of Mrs. Helen Ostdiek. 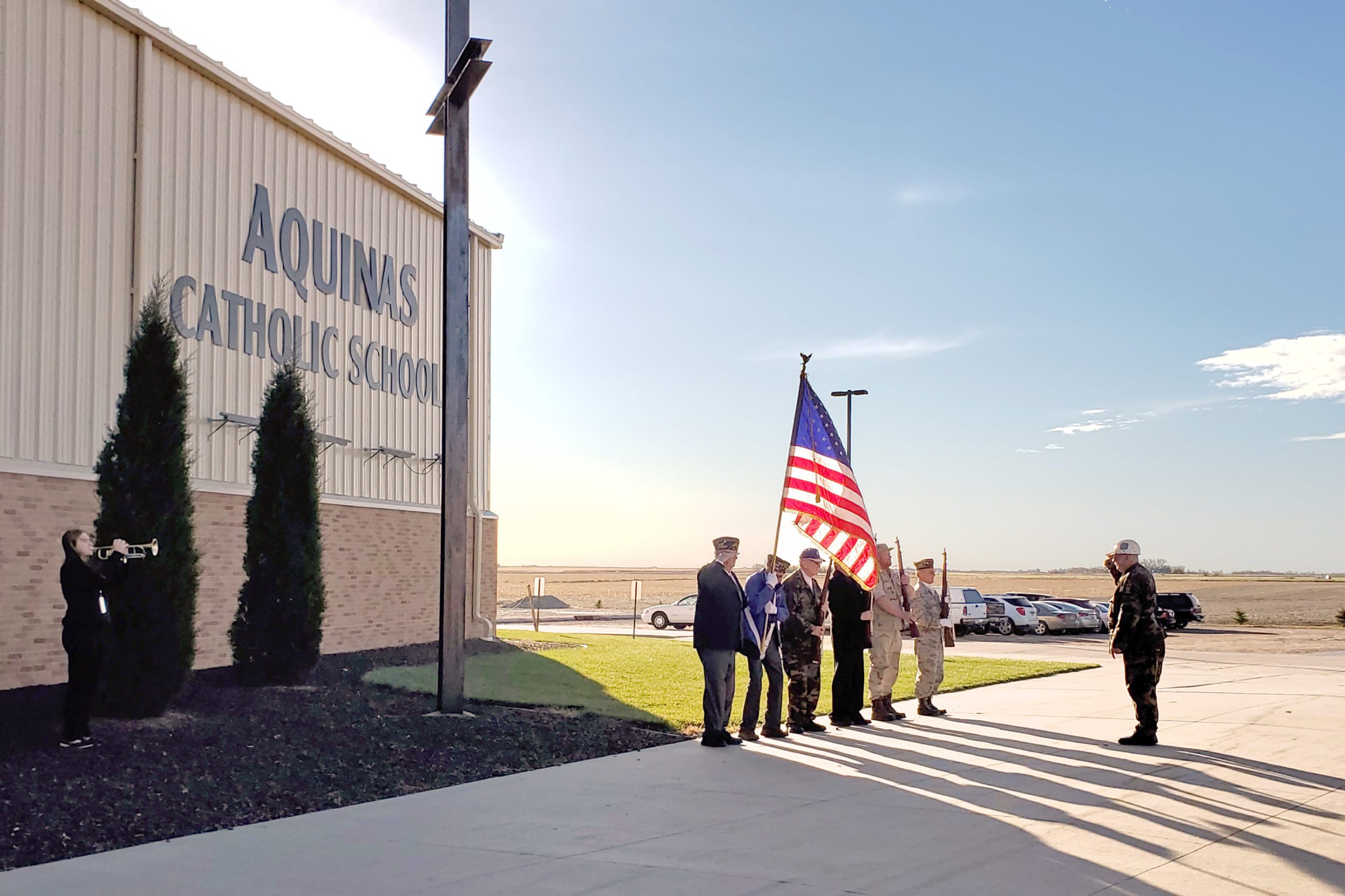 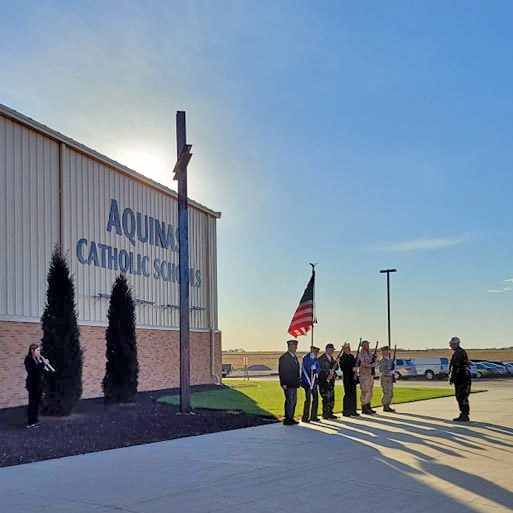 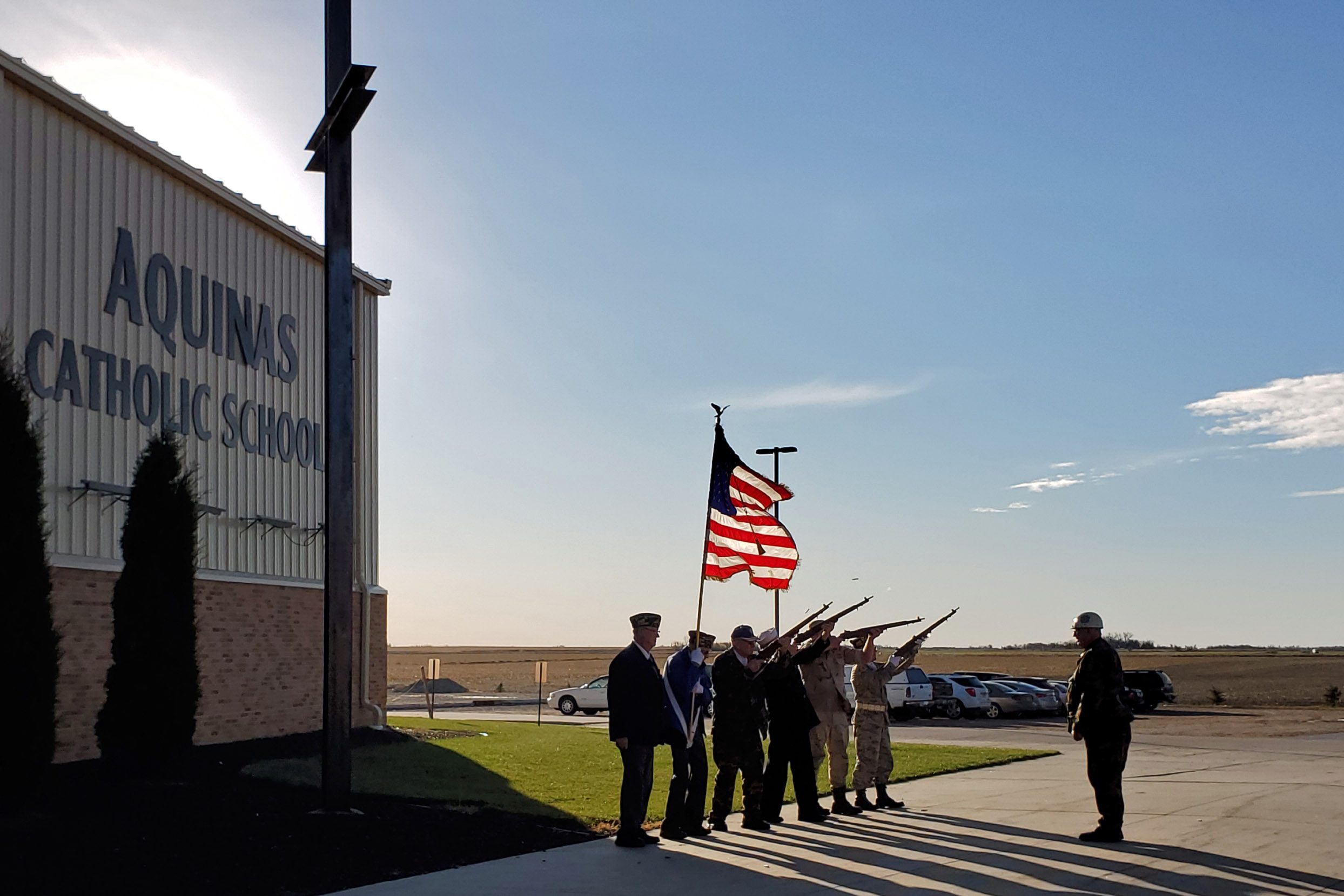