The Mission of Aquinas and St. Mary’s Catholic schools community is to provide a Christ-centered learning environment where we develop individuals to be disciples of Christ in all areas of their lives.

Foster a God-centered, Catholic culture to promote a Christ-like outlook on life

Nurture a life-long commitment to Christian values that promote growth in church, family, and civic relationships 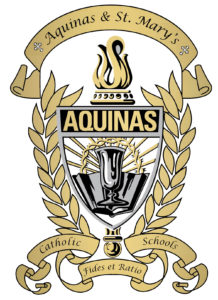 The crest of Aquinas & St. Mary’s Catholic Schools incorporates ideas from the life of St. Thomas. The open book symbolizes scholarship; the chalice depicts his love of the Eucharist, and the crown of thorns, the learning acquired by meditating on Christ Crucified. The lighted torch reminds the school of its responsibility to foster a love of Christ and of truth.

With great faith, the first parishioners or St. Mary’s Catholic parish decided to start a school. The doors of St. Mary’s Grade School opened in August 1899.

Fr. William A Murphy, pastor of St. Mary’s from 1933-1952, expressed his desire to offer a Catholic secondary education. With his transfer to St. Francis, Center, in 1952, this task was handed over to Msgr. Alphonse Lisko.

On August 29, 1954 the new St. Mary’s High School was blessed. The next day 57 students registered for the ninth and tenth grades. Twenty-five students completed their four year program on May 26, 1957. The High School remained in operation for 8 years until Aquinas High School was built.

On June 12, 1960, it was announced that the name of the school would be Aquinas High School. This title was chosen because St. Thomas Aquinas is the universal patron of Catholic Schools, and in addition, he was one of the greatest scholars of the Christian era; he had a special love for truth; he loved Christ above all; he had a great affection for Our Lady; he had a special love for the Eucharistic Sacrifice; and his idea of God’s providential guidance of all events is appropriate for all times. The school opened on September 5, 1961 with 295 students from 15 parishes in Butler, Polk, and Seward Counties. In 1986 a middle school was added to the system.

On Sept. 17 1990, the Council of Administration at Aquinas Middle School-High School, the Parish Council of St. Mary’s School and the Pastors of the David City Deanery held a joint meeting to discuss the future of Catholic Education in the three county area. It was the unanimous decision of each of these groups that Aquinas and St. Mary’s should be merged into one school system.

Aquinas Middle-High School is owned and operated by the thirteen parishes of the Aquinas area. This area comprises all of Butler County and parts of Polk and Seward Counties. The school’s operation policies are determined by the administration through recommendations of the staff and school councils, subject to the policies of the Diocese of Lincoln. The school enjoys a Class A accreditation by the Nebraska State Department of Education, is a member of the Nebraska School Activities Association, and as such, is subject to the rules and regulations of both of these bodies. 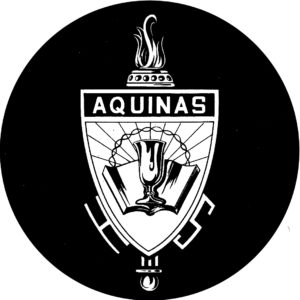 The school crest, which has been developed artistically into the terrazzo floor of the foyer, will be inscribed on all official papers and documents of Aquinas High School. It is rich in sacred symbolism. Into its artistic lines are incorporated ideas taken from the life of the school’s patron, St. Thomas Aquinas, as they relate to the future work of the institution.

St. Thomas Aquinas is remembered for his great scholarship – this is symbolized by the open book; he attributed most of his learning to meditation upon the crucified Savior – this is symbolized by the crown of thorns; his great love of the Blessed Eucharist, as exemplified in the beautiful Eucharistic hymns he composed, is symbolized by the sacred chalice. The lighted torch to which the shield is affixed indicates the work of the school in bringing a love of truth, devotion to the crucified Savior, and a love for the Blessed Sacrament to all the young men and women who will be the students of Aquinas. 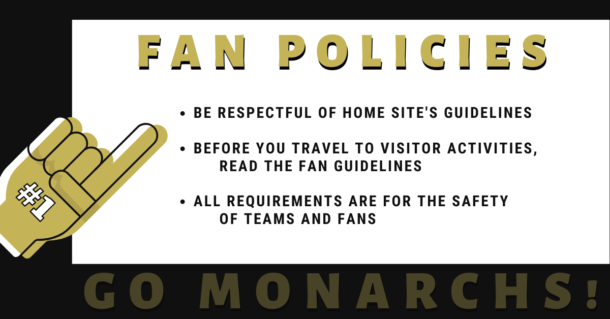 Monarch fans, please review fan guidelines for all home or away games. Thank you!